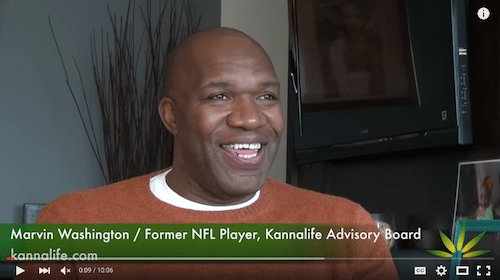 Marvin Washington, a Sports Advisory Board member for Kannalife Sciences, recently did an interview with Cannabis Frontier about the NFL, concussions, chronic traumatic encephalopathy (CTE), and how it all relates to cannabis. Specifically, he talked about how the league needs to research the undeniable connection between the two.

It’s never been more relevant because football is slowly becoming synonymous with concussions and CTE: look no further than Junior Seau’s tragic suicide. It was also made a mainstream topic of conversation by the Will Smith movie, Concussion, which follows Dr. Bennet Omalu’s discovery of the disease and the pushback he got from the NFL.

The game-changer for Washington was when he met Kannalife Sciences founders Dean Petkanas and Thoma Kikis. They told him that Kannalife had two licenses with National Institutes of Health to research hepatic encephalopathy (HE) and chronic traumatic encephalopathy (CTE) using cannabinoids as therapeutic agents.

This license to U.S. Patent 6,630,507 – “Cannabinoids as Antioxidants and Neuroprotectants” – the ‘507 Patent – and Kannalife’s existing preclinical research in HE, is what immediately grabbed Washington’s attention.

“I’m trying to let people know that this chemical in the cannabis plant has medicinal benefits not only for the brain, but for the whole body,” says Washington. “It’s like the allegory that Dean Petkanas loves to tell about a rising flood and a man trapped in his house. The water reaches the first floor and a fire engine and crew come to rescue him, the man responds to the rescue by saying ‘I’ll be ok, God will save me.’ Then the water reaches the second floor and a coast guard rescue boat comes to rescue the man, and he rejects the effort claiming again, ‘I’m ok. God will save me.’ And as he is finally standing on the roof of the house and the last recue attempt by Army rangers in a helicopter, again the man declines, stating ‘God will save me.” Well he perishes and meets his maker and while thankful for being in Heaven, nevertheless asks God, ‘I was faithful and kept the hope that you would save me, what happened?’ God answered, ‘I sent you a fire truck, rescue boat and helicopter.’”

Make sure to stay up to date on all that’s happening with Kannalife Sciences, Washington’s treatCTE campaign, and make your voice heard in the conversation surrounding concussions.

Here’s the full interview that Cannabis Frontier did with Washington: