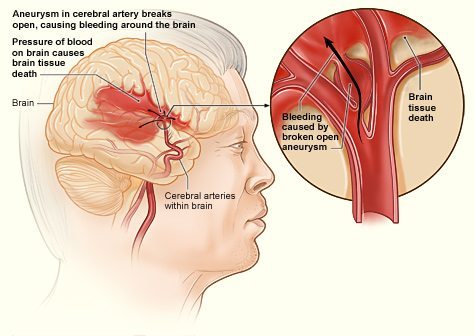 A stroke, previously known medically as a cerebrovascular accident (CVA), is the rapidly developing loss of brain function(s) due to disturbance in the blood supply to the brain. This can be due to ischemia (lack of blood flow) caused by blockage (thrombosis, arterial embolism), or a hemorrhage (leakage of blood). As a result, the affected area of the brain is unable to function, which might result in an inability to move one or more limbs on one side of the body, inability to understand or formulate speech, or an inability to see one side of the visual field.

A stroke is a medical emergency and can cause permanent neurological damage, complications, and death. It is the leading cause of adult disability in the United States and Europe and the second leading cause of death worldwide. Risk factors for stroke include old age, hypertension (high blood pressure), previous stroke or transient ischemic attack (TIA), diabetes, high cholesterol, cigarette smoking and atrial fibrillation. High blood pressure is the most important modifiable risk factor of stroke.

A silent stroke is a stroke that does not have any outward symptoms, and the patient is typically unaware they have suffered a stroke. Despite not causing identifiable symptoms, a silent stroke still causes damage to the brain, and places the patient at increased risk for both transient ischemic attack and major stroke in the future. Conversely, those who have suffered a major stroke are at risk of having silent strokes. In a broad study in 1998, more than 11 million people were estimated to have experienced a stroke in the United States. Approximately 770,000 of these strokes were symptomatic and 11 million were first-ever silent MRI infarcts or hemorrhages. Silent strokes typically cause lesions which are detected via the use of neuroimaging such as MRI. Silent stroke are estimated to occur at five times the rate of symptomatic stroke. The risk of silent stroke increases with age but may also affect younger adults and children, especially those with acute anemia.

An ischemic stroke is occasionally treated in a hospital with thrombolysis (also known as a “clot buster”), and some hemorrhagic strokes benefit from neurosurgery. Treatment to recover any lost function is termed stroke rehabilitation, ideally in a stroke unit and involving health professions such as speech and language therapy, physical therapy and occupational therapy. Prevention of recurrence may involve the administration of antiplatelet drugs such as aspirin and dipyridamole, control and reduction of hypertension, and the use of statins. Selected patients may benefit from carotid endarterectomy and the use of anticoagulants