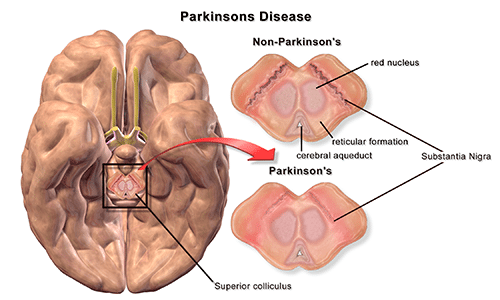 Parkinson’s disease (also known as Parkinson disease, Parkinson’s, idiopathic parkinsonism, primary parkinsonism, PD, or paralysis agitans) is a degenerative disorder of the central nervous system. It results from the death of dopamine-containing cells in the substantia nigra, a region of the midbrain; the cause of cell-death is unknown. Early in the course of the disease, the most obvious symptoms are movement-related, including shaking, rigidity, slowness of movement and difficulty with walking and gait. Later, cognitive and behavioral problems may arise, with dementia commonly occurring in the advanced stages of the disease. Other symptoms include sensory, sleep and emotional problems. PD is more common in the elderly with most cases occurring after the age of 50.

The main motor symptoms are collectively called parkinsonism, or a “parkinsonian syndrome”. Parkinson’s disease is often defined as a parkinsonian syndrome that is idiopathic (having no known cause), although some atypical cases have a genetic origin. Many risk and protective factors have been investigated: the clearest evidence is for an increased risk of PD in people exposed to certain pesticides and a reduced risk in tobacco smokers. The pathology of the disease is characterized by the accumulation of a protein called alpha-synuclein into inclusions called Lewy bodies in neurons, and from insufficient formation and activity of dopamine produced in certain neurons of parts of the midbrain. Diagnosis of typical cases is mainly based on symptoms, with tests such as neuroimaging being used for confirmation.

Modern treatments are effective at managing the early motor symptoms of the disease, mainly through the use of levodopa and dopamine agonists. As the disease progresses and dopamine neurons continue to be lost, a point eventually arrives at which these drugs become ineffective at treating the symptoms and at the same time produce a complication called dyskinesia, marked by involuntary writhing movements. Diet and some forms of rehabilitation have shown some effectiveness at alleviating symptoms. Surgery and deep brain stimulation have been used to reduce motor symptoms as a last resort in severe cases where drugs are ineffective. Research directions include a search of new animal models of the disease and investigations of the potential usefulness of gene therapy, stem cell transplants and neuroprotective agents. Medications to treat non-movement-related symptoms of PD, such as sleep disturbances and emotional problems, also exist.

The disease is named after the English doctor James Parkinson, who published the first detailed description in An Essay on the Shaking Palsy in 1817. Several major organizations promote research and improvement of quality of life of those with the disease and their families. Public awareness campaigns include Parkinson’s disease day on the birthday of James Parkinson, April 11, and the use of a red tulip as the symbol of the disease. People with parkinsonism who have enhanced the public’s awareness include Michael J. Fox and Muhammad Ali.