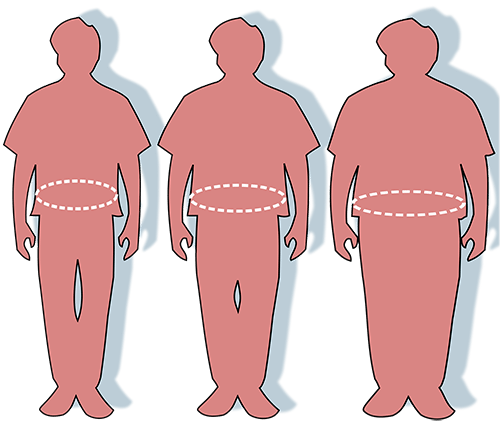 Obesity is a medical condition in which excess body fat has accumulated to the extent that it may have an adverse effect on health, leading to reduced life expectancy and/or increased health problems. Body mass index (BMI), a measurement which compares weight and height, defines people as overweight (pre-obese) if their BMI is between 25 and 30 kg/m2, and obese when it is greater than 30 kg/m2.

Obesity increases the likelihood of various diseases, particularly heart disease, type 2 diabetes, obstructive sleep apnea, certain types of cancer, and osteoarthritis. Obesity is most commonly caused by a combination of excessive food energy intake, lack of physical activity, and genetic susceptibility, although a few cases are caused primarily by genes, endocrine disorders, medications or psychiatric illness. Evidence to support the view that some obese people eat little yet gain weight due to a slow metabolism is limited; on average obese people have a greater energy expenditure than their thin counterparts due to the energy required to maintain an increased body mass.

Dieting and physical exercise are the mainstays of treatment for obesity. Moreover, it is important to improve diet quality by reducing the consumption of energy-dense foods such as those high in fat and sugars, and by increasing the intake of dietary fiber. To supplement this, or in case of failure, anti-obesity drugs may be taken to reduce appetite or inhibit fat absorption. In severe cases, surgery is performed or an intragastric balloon is placed to reduce stomach volume and/or bowel length, leading to earlier satiation and reduced ability to absorb nutrients from food.

Obesity is a leading preventable cause of death worldwide, with increasing prevalence in adults and children, and authorities view it as one of the most serious public health problems of the 21st century. Obesity is stigmatized in much of the modern world (particularly in the Western world), though it was widely perceived as a symbol of wealth and fertility at other times in history, and still is in some parts of the world.