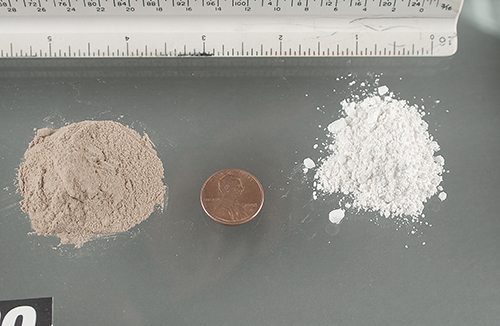 Heroin is an illegal, highly addictive drug. It is a white or brown powder or a black, sticky substance. It can be sniffed, snorted, smoked, or injected into a muscle or vein. It is often mixed or cut with other drugs and substances, such as sugar or powdered milk. It may also be cut with poisons, such as strychnine.

The pleasurable sensation from heroin is called a rush, and the intensity of the rush depends on how much drug was taken and how rapidly the drug entered the brain. When a person injects heroin directly into a vein, the rush occurs within seconds, whereas it takes at least 10 minutes when the drug is sniffed or smoked. Along with the rush, the person using heroin usually has a warm flushing of the skin, small pupils, watery eyes, runny nose, dry mouth, and a heavy feeling in the arms and legs. Heroin may also cause nausea, vomiting, and severe itching. Soon after the rush, the person feels drowsy and very relaxed. Breathing and heart rate slow, thinking becomes cloudy, and the person may fall into a trancelike state that can last 4 to 6 hours.

Heroin is often used along with other drugs, especially cocaine and alcohol. Some people snort alternate lines of heroin and cocaine, which is called crisscrossing, or they may inject it with another drug. With repeated use, heroin causes the person to need higher and higher doses of the drug to get the same effect as they build up a tolerance. It also causes the person’s body to need the drug to function (physical dependence), which leads to withdrawal symptoms within a few hours if the person stops using it. Physical and psychological dependence can develop within a few weeks if the drug is used daily.

Several health problems can develop with heroin abuse, including:

Bacterial infections of the blood vessels and heart valves.
Liver or kidney disease.
Lung problems, such as pneumonia and tuberculosis, from poor health.
Hepatitis B and C, HIV, and other diseases, if using shared injection equipment or fluids.