THE FIRST COMPANY TO HAVE CANNABIS PRODUCTS SUBSIDIZED BY MEXICAN GOVERNMENT

In 2017, Medical Marijuana, Inc. international subsidiary HempMeds® Mexico became the first company to have a cannabis-based product, RSHO-X™, subsidized by a government in Mexico.

Having one of our company’s products subsidized in Mexico is an important step towards normalization of cannabis treatments as the country establishes its new policies following Mexico’s legalization of medical cannabis.

HempMeds® Mexico reached this milestone in August of 2017, just over a year after the company shipped its unique THC-free hemp oil products to Mexico for the first time.

The State of Mexico’s government purchased RSHO-X™ from HempMeds Mexico® to treat 11 of its citizens who are suffering from varying indications including refractory epilepsy and Lennox-Gastaut Syndrome. This is the first time a government in Mexico has purchased CBD products for its citizens.

Eruviel Avila, the State of Mexico’s Governor, distributed the RSHO-X™products purchased by the state to the 11 patients at the inauguration of a new clinic located in the city of Ecatepec on August 17, 2017.

“WE WANT TO CONGRATULATE THE STATE OF MEXICO’S GOVERNMENT FOR THIS HISTORIC PURCHASE OF OUR RSHO™ CBD PRODUCTS TO HELP IMPROVE THE LIVES OF ITS CITIZENS,” SAID MEDICAL MARIJUANA, INC. DR. STUART TITUS. “WE ARE A COMPANY OF FIRSTS, INCLUDING HAVING THE FIRST AND ONLY FEDERALLY LEGAL CBD PRODUCT IN MEXICO AND WE ARE EXCITED ABOUT THIS NEW HISTORIC MILESTONE OF BEING THE FIRST COMPANY THAT THE GOVERNMENT OF MEXICO HAS CONTRACTED TO PURCHASE AND PAY FOR CANNABINOID CBD PRODUCTS TO BENEFIT ITS CITIZENS.”

News of the government’s purchase of RSHO-X™ for patients in the region comes shortly after the company cut the ribbon on its first home office in the country in the town of Monterrey. HempMeds® Mexico’s first home office serves as its hub for its operations in the country. The office’s central geographic location functions as a strategic bridge between South, Central, and North America for San Diego-based Medical Marijuana, Inc. 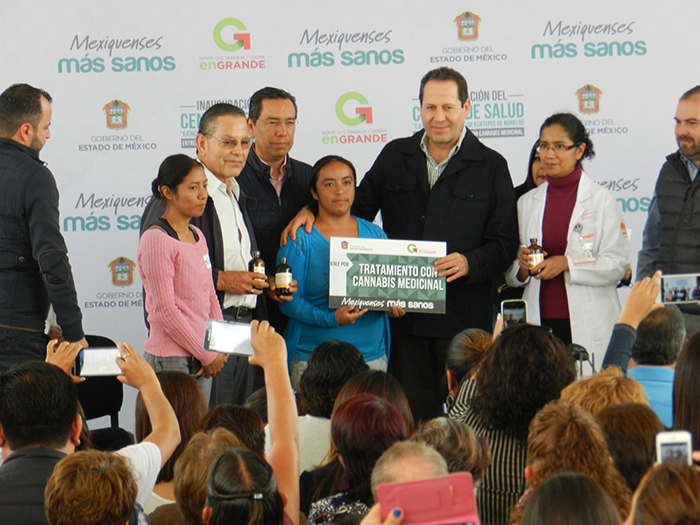 RSHO-X™ was the first legally imported cannabis product into the country in February of 2016 when the Health Department of Mexico, COFEPRIS, issued the country’s first-ever government permits for the import and use of HempMeds® Mexico’s CBD products.

These historic first import permits were the entry point for HempMeds® products into the Mexican market and marked a turning point in Mexico’s medical cannabis policy, leading to the legalization of cannabis products for medical purposes nationwide.

Since before entering the Mexican market, Medical Marijuana, Inc. has been dedicated to expanding access to cannabinoids to the 120 million citizens in the country. Medical Marijuana, Inc. hosted and participated in a number of educational sessions and public debates on access to medical cannabinoids in the months leading up to the authorization of CBD in Mexico. Now patients in Mexico can apply to COFEPRIS to import CBD oil products from HempMeds® Mexico for difficult to treat conditions like epilepsy and cancer.