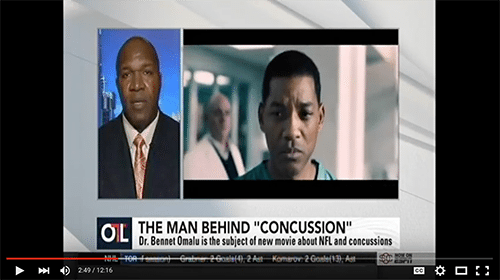 Will Smith’s newest movie, Concussion, is hitting theaters on Christmas Day – we’ve all seen the trailers for it. What you might not be aware of, though, is the conversation that Dr. Bennet Omalu’s story has ignited in the days leading up to its release.

Concussion follows the real life work that Dr. Omalu did to discover chronic traumatic encephalopathy (CTE), a disorder that can only be currently diagnosed posthumously. Further, it details the major pushback he got from the NFL while trying to raise awareness of the ailment post-discovery.

Dr. Omalu’s work was instrumental in building a robust foundation for Kannalife Sciences, a Medical Marijuana Inc. portfolio company, to research CTE. Currently, Kannalife is in the process of developing cannabinoid therapies to help treat CTE, holding a license from the National Institutes of Health to do so.

“I think it’s [Concussion] going to find a way into a lot of holiday conversations,” says Keating. “When we break news or report news we’re talking about the leading edge of research or unusual and unexpected developments. There’s a trailing edge to this: millions of people are encountering this story of concussions for the first time.”

All three agreed that the movie was accurate when detailing the extent of Dr. Omalu’s work. They also agreed that the tone was somber. Regardless, it still sparked conversations when the credits rolled.

“This movie is going to bring the subject [of concussions and CTE] into the mainstream,” says Washington. “People will come away with a new perspective on football.”

Granted, the panel agreed that nobody wants football to die. Rather, it’s all about making the game safer for both current and future players.

To that end, Washington has secured a spot as an advisory board member with Kannalife Sciences, a company that has an exclusive license from the United States Government via Patent #6,630,507 to utilize all non-psychoactive cannabis as antioxidants and neuroprotectants. In theory it could be used to research potential treatments for neurodegenerative disorders like CTE.

However, as many people will be approaching the world of concussions for the first time as they experience the movie, they’ll also be new to the world of CTE as it relates to CBD. That’s why Washington and Kannalife have kicked off their #TreatCTE campaign, where they’ll raise awareness about potential treatments and cures for CTE.

CTE and concussion education is something that Washington holds very close to his heart, as his son is currently playing in the Canadian Football League. Not only does he routinely discuss concussions with his son, the two are both on CBD regimens.

“I’m on a CBD regimen, I try to exercise, I eat a fortified diet, and I think all ex-players should do this,” says Washington.

As he says, protecting your brain and head is going to come from science, and not from equipment, because there’s no helmet that can stop a concussion.

“If you don’t want a concussion, don’t play football. But if you’re going to play football let’s make it as safe as we can,” says Washington.

It seems like a pretty clear cut issue: the NFL should make football as safe as possible for their players, but that’s where things start to get tricky. According to Washington, the treatment side of things is where money should be allocated, but so far the NFL is “woefully lacking” in that area.

Most would absolutely agree that preventative measures are necessary, especially considering that NFL players rarely live past their 50s. The good news is that there’s already a lot of information in circulation about said measures, which is something Washington tries to disseminate through his work with Kannalife Sciences and the TreatCTE campaign.

“So many guys suffer in silence and pain, and it doesn’t have to be that way,” says Washington.

This all begs a very real question though: what is the NFL doing to remedy the situation? According to Washington, they’ve done a lot as far as rules and regulations, but when you still have concussion deniers working with the NFL things become suspect. Specifically, he’s talking about Dr. Elliot Pellman, who helped author a 16 page report claiming it was medically OK to send concussed players back into the game.

It’s further complicated by the fact that the NFL’s concussion lawsuit deal was described by many affiliated parties as inadequate: it only provided medical coverage to CTE victims who died from 2006 to 2014, an eight year window. To Washington, this says that the NFL is not doing all they can to help.

“The thing I can tell you about the NFL concussion settlement is that if Junior Seau, Mike Webster, or Andre Waters were alive today they wouldn’t get one red cent out of that settlement,” says Washington. “The NFL needs to set up a CTE treatment fund specifically that deals with that.”

It doesn’t look like they’ll be doing that anytime soon. In fact, it was just announced that the NFL has decided to back out of funding a monumental brain study at Boston University because they didn’t like the lead researcher, Dr. Bob Stern. Per ESPN:

“The seven-year, $16 million initiative was to be funded out of a $30 million research grant the NFL gave the National Institutes of Health in 2012. The NFL has said repeatedly that it has no control over how that money is spent, but the league balked at this study, sources said, because the NIH awarded the project to a group led by a prominent Boston University researcher who has been critical of the league.”

Just to reiterate, the study that the NFL just backed away from was part of a $30 million research grant given to the NIH by the NFL. It’s an odd move considering that the NFL has been outspoken about wanting to decrease the amount of head trauma in the game.

Further, though, CTE can only be currently diagnosed post-mortem. This study, which the NFL has backed out of, is structured to tap the holy grail of CTE research: diagnosing CTE in living patients.

That kind of diagnostic ability would go a long way since CTE isn’t an exclusively football related injury. The CDC says there are upwards of 2.5 million concussions per year, with about half resulting in hospitalization. As Dr. Omalu says in the PBS Frontline documentary, League of Denial, even one concussive injury is enough to potentially cause long term mental impairment.

Kannalife Sciences isn’t backing out of anything though: they’ve announced a fundraising initiative with Temple University to study the efficacy of cannabinoid therapeutics on TBI and CTE as part of the treatCTE campaign. Not to mention, Kannalife has the exclusive license to the NIH patent to research CBD therapeutics, which will open doors the NFL would rather see closed.

This is why Concussion is so important, and it’s why Washington’s mission with Kannalife Sciences goes so much further than just awareness about CTE. They’re helping to effect major changes at nearly all levels of life, for all people, not just football players.

Be sure to check out Kannalife Sciences and stay up on their efforts to help treat CTE. Also, #ShowYourGreen and donate to the treatCTE campaign if you want to be part of the movement.