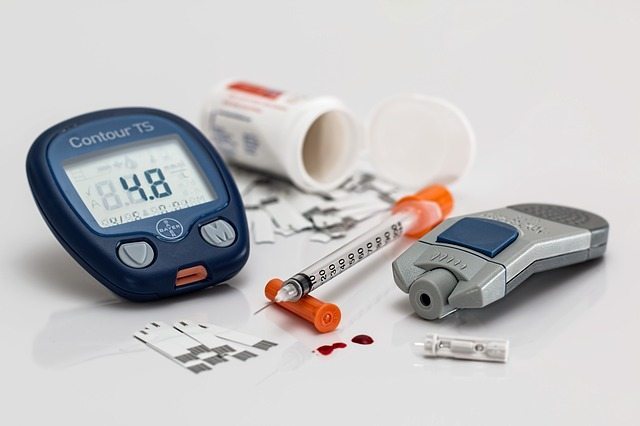 Diabetes mellitus, often simply referred to as diabetes, is a group of metabolic diseases in which a person has high blood sugar, either because the body does not produce enough insulin, or because cells do not respond to the insulin that is produced.

There are three main types of diabetes:

Type 1 diabetes: results from the body’s failure to produce insulin, and presently requires the person to inject insulin. (Also referred to as insulin-dependent diabetes mellitus, IDDM for short, and juvenile diabetes.)

Type 2 diabetes: results from insulin resistance, a condition in which cells fail to use insulin properly, sometimes combined with an absolute insulin deficiency. (Formerly referred to as non-insulin-dependent diabetes mellitus, NIDDM for short, and adult-onset diabetes.)

Gestational diabetes: is when pregnant women, who have never had diabetes before, have a high blood glucose level during pregnancy. It may precede development of type 2 DM.

Other forms of diabetes mellitus include congenital diabetes, which is due to genetic defects of insulin secretion, cystic fibrosis-related diabetes, steroid diabetes induced by high doses of glucocorticoids, and several forms of monogenic diabetes.

All forms of diabetes have been treatable since insulin became available in 1921, and type 2 diabetes may be controlled with medications. Both type 1 and 2 are chronic conditions that usually cannot be cured. Pancreas transplants have been tried with limited success in type 1 DM; gastric bypass surgery has been successful in many with morbid obesity and type 2 DM. Gestational diabetes usually resolves after delivery.

As of 2000, at least 171 million people worldwide suffer from diabetes, or 2.8% of the population. Type 2 diabetes is by far the most common, affecting 90 to 95% of the U.S. diabetes population.

Cannabidiol As a Putative Novel Therapy for Diabetic Retinopathy: A Postulated Mechanism of Action as an Entry Point for Biomarker-Guided Clinical Development